March 07, 2021
My Caterpillar   My caterpillar is green and scaled, On it lines as railway rails   Like a small rope, it has its tail, It feels like usually, it is weak and frail   Like a snake, it moves wiggling its tail, There’s no exam in which he can pass or fail       When it wasn’t my pet, I would say, “Aye, aye, go away”, He has to move so many days Of it, I am unafraid, Seldom we would dance and play   Block the sunlight’s rays, Play with shadows morning and day, Such a close friendship we both lay
1 comment
Read more

March 07, 2021
Storm don’t ever come   A buffering wind comes from the side, Which walks in and glides   Blows up trees and houses very quick, The flowers by this calamity are naturally being plucked   The children shivering their self in fear, Sitting at the corner and sad water drops coming from the eyes, the sensitive tears     The storm carries everything around, The atmosphere there is bizarre and loud     It carries even the ragged clothes of the poor, Their life how could they bare   As people give their lives in that ugly, bad storm, Also kills the trees who stood firm   A sorrow square built over the place, Uprooting the very strong base (living organisms)   Ones the storm is out, There is a cry which is extremely loud
Post a Comment
Read more

Compassion to the world is a success

March 07, 2021
Compassion to the world is a success Compassion is to have helpful thoughts in your mind, Thoughts in your mind which change the world, Thoughts such as having pity on others and to be tender and kind, If you become a truly compassionate person everyone would be   Startled by your sympathetic behavior towards your community, Helping people who are in difficulties, You can build up your fame by just the compassion and empathy, And by your kindness and bravery         This is what is the essence of compassion, The love you show to others touches them, You try to kill the world’s tension, And then you become the best person on the planet
Post a Comment
Read more

Mother-my precious gem💎 in my life

March 07, 2021
Mother-my precious gem💎 in my life M y mom is fantabulous , O ther than the world’s any mother, T he care, love, compassion she has shown to me, H as impressed me a lot E nthralled she would make me, R are is such a mom, The mesmerizing smell comes from the food which she makes, Y ummy food for me to be happy,     P erfect and prepossessing are the words to describe her R emembering all my childhood days, E specially when I was at the age of 1-2, C hambers of love and glory she would settle in my life, I n this journey of 10 years, O ne in infinity is she, The universe is her friend, I think sometimes, S hhh! I think this because everything I wish it comes to me automatically, A gem so precious which I got in my life, E nhancing the beauty of my life’s success, M y mom is such a person who is infinite times more than gold
Post a Comment
Read more

My shadow Moves with me wherever I go, Sometimes comes far, sometimes close, Same looks, same body shape, It is not punctuate sometimes early, sometimes late, It’s sometimes long like a giraffe, Or short like a turtle, It is always black, At the bottom of me, it would stand, It appears only because of his friend, Without which the shadow would get vanished, S-H-A-D-O-W, Comes on the beach as well as meadows, Its friend is the sun, Because of it the shadow forms and the shadow stands firm, We can’t break it, But when its friend is not there the shadow’s life is quit, But again it appears, And I become angry and fierce
Post a Comment
Read more 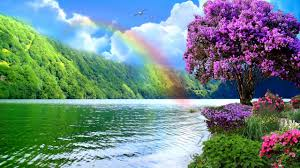 The beaming rays have trapped the grass in the bottom. The meadows spread as far as love can. The fresh breeze invigorates me. The trees stand lofty and take their place higher than us. Happiness blooms out of every flower in the dancing rows. The chirps of birds echo in every corner of that beautiful site providing an aroma of sweet melody all around. The eyes of the clouds blink surrounding their bewitching sight in the beautiful, blue sky. Every flower fencing the place flows the sweet fragrance there. My glasses shine with glowing light.  A rainbow rails across the sky.  And a charming smile glistened my face.
Post a Comment
Read more

What I would like to say to a child younger than me?

March 05, 2021
Life is a game. Fight against the monsters and win the game. Life is similar to it, where many people don't know what you are capable of doing. Just kill them by doing such extraordinary work that their mouths remain open seeing at you and knowing your real character. But it is not that easy, first, you need to make a plan of what good thing you are going to do and you implement it in your life. Shine yourself among the others and prove that you are the best. Ignore all the bad extras that come in your way and just go ahead in reaching your success. Don't lead a simple life and do something out of the blue!!
Post a Comment
Read more
More posts